Last July we were thrilled to be part of Gemma and Carl’s big day at The Horse and Bamboo theatre in Rossendale. This wedding was special for a number of reasons, firstly, it was the first time we’d ever worked in this amazing space, full of puppets and hand-crafted props that have been touring the globe since 1978 (sometimes from the back of a horse drawn cart just like the travelling actors of old) and secondly, because it was full of creative, bonkers and incredibly lovely people. A perfect match! 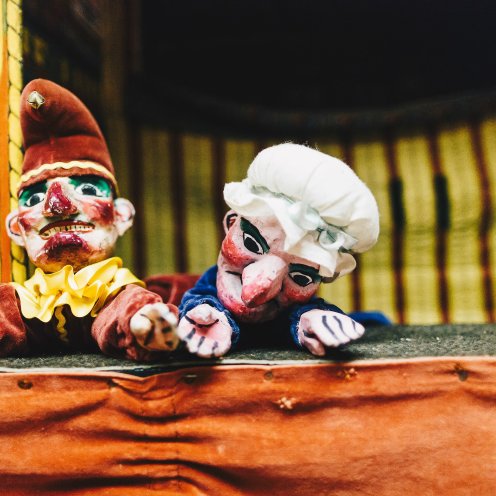 Both Gemma and Carl are musicians, which meant they had lots of music makers in their merry band of friends. Groom Carl is a part of Mr Wilson’s Second Liners, a roaming band who you might of seen playing New Orleans influenced 90’s dance hits on the streets of your town whilst dressed like Sergeant Pepper’s Lonely Hearts Club Band. 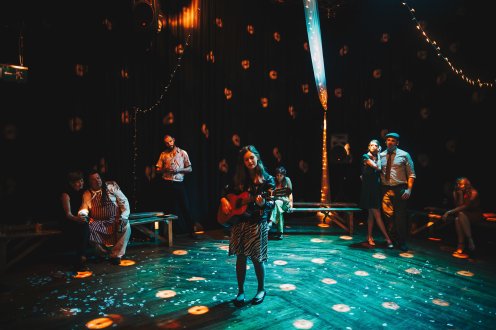 Whilst Carl himself was allowed a day off (it seemed only fair on his wedding day) his compadres provided its soundtrack in many different ways. A three piece played their own version jazzed up version of “Here Comes The Bride” (arranged by Carl), a hony-tonk pianist serenaded the guests as they ate their meals and then to top everything off the roaming Ski Band (dressed as chiefs and carrying tubas, trumpets, accordians and mini-drum kits) climbed on tables and did a walk about performance through the venue. Everyone was on their feet! The Ski Band actually climbed on tables and played ska hits and sing-a-long favourites to guests old and young. But we’re getting ahead of ourselves… 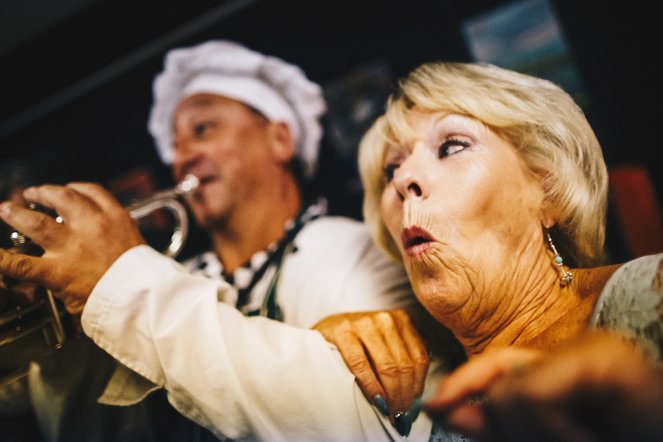 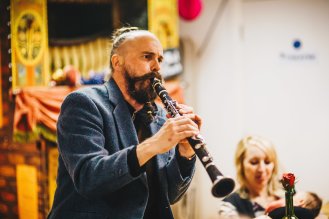 The Horse and Bamboo is a fabulous wedding venue because it basically has everything you need to create an unforgettable wedding from scratch. With a good sized blank-canvas theatre (complete with a professional lighting rig and PA sound system) that we turned into a ceremony space (then turned around for the evening reception), a dining room with space for a bar and up to 80 guests, a prep-kitchen for caterers to use and an outside garden area with a mini-stage and mobile food van area to serve from, you really couldn’t ask for much more. The award winning Hip Hop Chip Shop served mouth-watering fish and chips on this occasion from the front of a giant cassette tape! 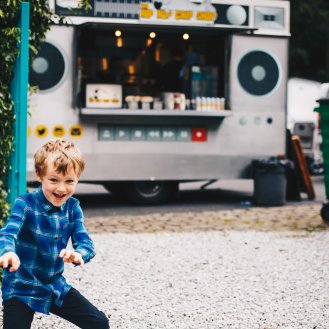 Just to make things extra special for Gemma and Carl we brought in bar services from BARK Mcr and to say these guys went above and beyond is an understatement. Massi and Luca are an amazing team operating from Manchester. Massi is best described as an alcoholic alchemist who’s honed his craft working in next-level cocktails bars such as Cane and Grain in the Northern Quarter and has a literal laboratory at home where he mixes his strange and delicious elixirs. For Gemma and Carl’s wedding he created His and Hers cocktails, hers was wild berries and vanilla whilst his was a rosemary infused mojito. They looked so beautiful, it was almost a shame to drink them (but we did, everyone did until they were all gone – the lovely bride Gemma had one of each!!) 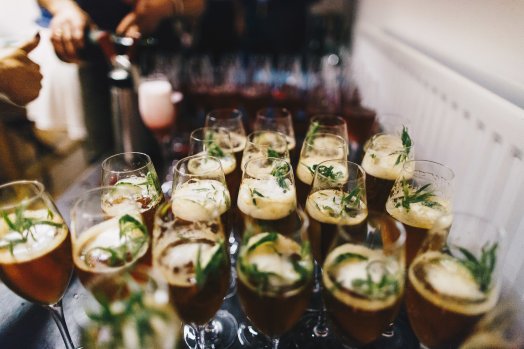 We had such a good time helping Gemma and Carl run their big day that it didn’t feel like work at all and the best thing is that The Boo were so pleased they’ve asked Alternative Weddings MCR to be their new in-house wedding planners. So if you like more information about their packages and how we make your day as unique as Gemma and Carl’s then please do get in touch.

Sending all the love in the world to Gemma and Carl, it was an honour to be able to share in your big day and it was a wedding WE’LL never forget!! 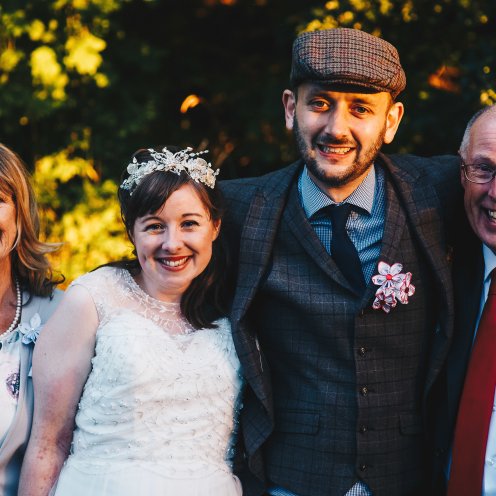 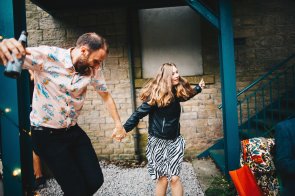 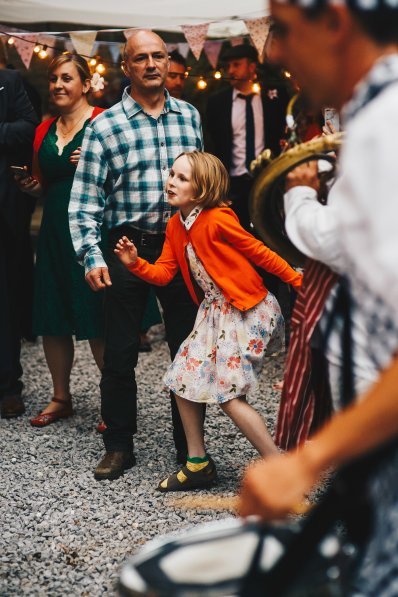 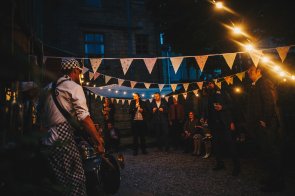 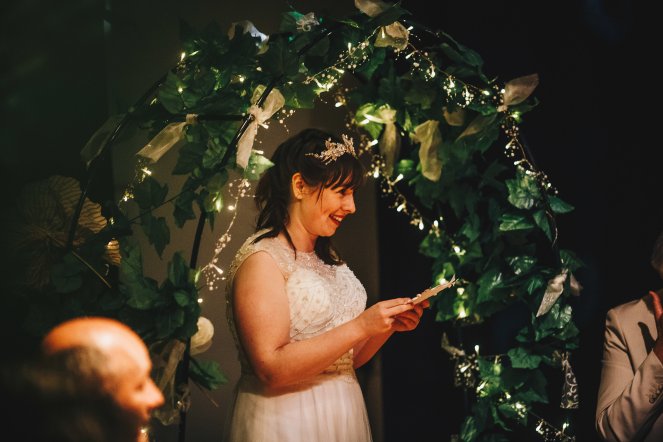 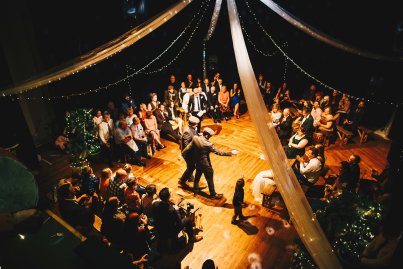 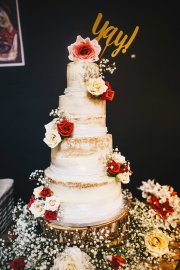 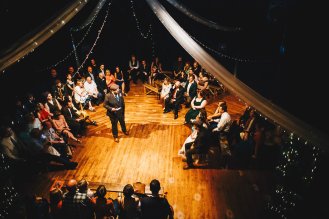 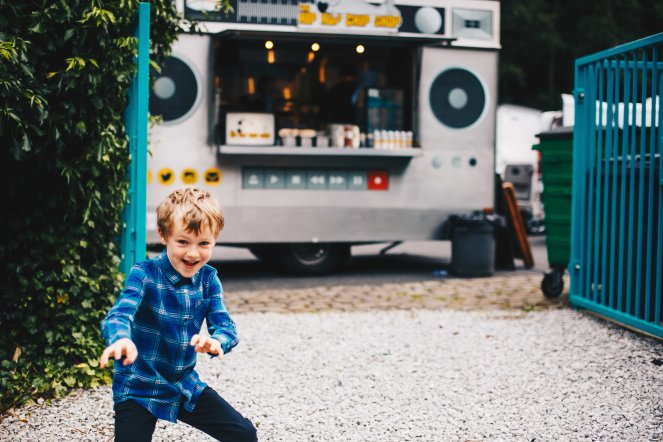 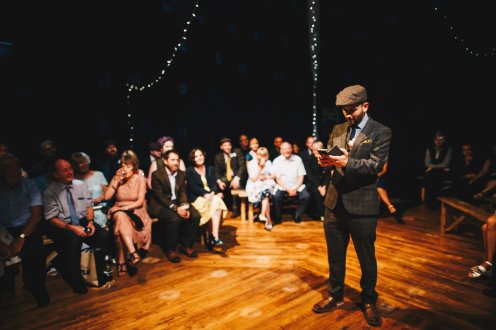 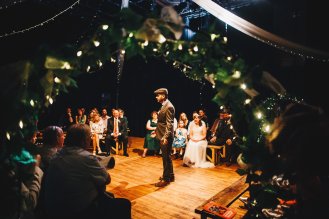 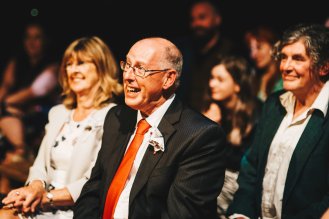